Sometimes, adversity leads to a new idea, and a new business. About a decade ago, Ben Jones, the founder and CEO of Ohi, a New York-based fulfillment startup, was in fixed income sales and trading in London. Then he suffered a back injury that left him paralyzed for a period of time. His recovery following surgery involved 16 months of rehabilitation. “As a consequence, I had to rely on e-commerce for everything,” he recalls. “It was massively frustrating because I could order things from Amazon and get delivery the next day while everything else was a 3-to-5 day delivery.”

Jones’ big question: Why can’t everyone do what Amazon does?

Fast forward, and Jones left banking, got an MBA at Stanford and moved to New York. Meanwhile, he continued to think about that big question.

His takeaway: Amazon built an infrastructure that allows it to position inventory near its customers. Plus, it has the technology backbone and logistics network to get the product to consumers quickly. Meanwhile, consumer brands and retailers were competing from large traditional warehouses in logistics hubs in the middle of the country, where meeting Amazon-like service levels was expensive. E-commerce startups and small retailers were out on their own, likely relying on 3PLs, with traditional warehouses also in logistics hubs. Think of it as David fighting Goliath, but without the slingshot.

The next big question was: What if you had a network of facilities in the geographies where you want to do business and could connect those to providers of fast and low-cost last-mile delivery? And, hey, could you do that in a model similar to what Airbnb is doing? The answer, says Jones, was Ohi.

The company went live in March 2019 and raised close to $2.75 million in a seed funding round led by Flybridge Capital Partners that was announced last November. “We’ve been growing very quickly, doing tens of thousands of orders a month, and planning on another funding round later in 2020 to fund our growth into more cities,” Jones says. The company is now operating in New York City, Brooklyn, San Francisco, Los Angeles and San Diego, with plans to go into Charlotte, Austin and Dallas.

So, what is Ohi? Think first of a platform that utilizes non-utilized space that can be turned into a micro-warehouse for e-commerce order fulfillment. Now, that may sound like on-demand warehousing, but Jones differentiates between the two. “They’re focusing on available space in the traditional warehousing network.,” he says. “We’re looking at dead space that can be turned into usable space for micro-fulfillment services.” 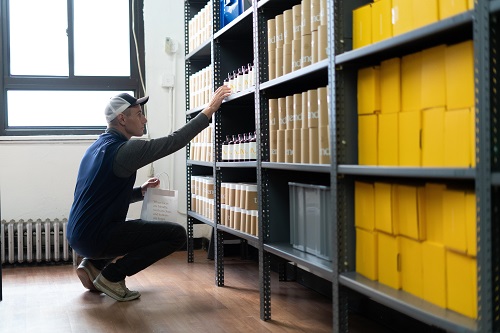 That space will be located in a metropolitan area to enable 2 hour and same day delivery. That could be empty office space, or a vacant store front in your neighborhood strip plaza that can be converted into a 2,000 to 5,000 square foot distribution center. “Our criteria is that it’s a secure site with easy access for our partners,” Jones says. “We install a security system and put up shelving and we’re ready to go.” One space in Manhattan is the floor of a building in the garment district; in Los Angeles they’re operating out of a former salon; and in San Francisco its a former automotive shop to name a few.

The model is tech light, but smart: Hence, the term smart warehousing. Given the relatively small footprints, equipment is shelving, pick to cart, and a rudimentary packing system tied to Ohi’s inventory and order management system. The facility can be run from a cell phone. The technology is integrated into the customer’s e-commerce site. When an order drops, its routed to the right warehouse to fill the order based on the customer’s delivery preferences. Ohi maintains control of the order until it’s handed off to a delivery partner, usually a local last-mile delivery firm. Ordering customers can choose between two-hour and same-day delivery. Ohi texts delivery information to the customer that looks like an extension of the brand.

What are some of the lessons Jones has learned in the last 15 months. First is the power of partners. When Ohi started out, he says, they operated the micro-warehouses with their own personnel. “We realized that working with partners allowed us to scale the platform,” he says. The second was how important it was to protect the brands of Ohi’s customers. “We focused on creating an awesome branded experience that extends our customer’s reach beyond checkout,” he says. “It’s a new space.”

SCMR’s Supply Chain Startup Blog is published every Friday. If you’re a startup, a venture capitalist or a supply chain practitioner working with startups, and want to share your story, or have startup news to share, email me at .(JavaScript must be enabled to view this email address). Remember that the purpose is not to promote any one firm – and a blog shouldn’t be interpreted as an endorsement of a firm or its technology. Rather it’s to start the dialogue between me, my readers and the people creating the NextGen Technologies that will power tomorrow’s supply chains.